How many pumpkins are sold for Halloween in the UK?

There are 10 million pumpkins grown in the UK every year. Most of which are grown to be used on Halloween as Jack-O-Lanterns, Asda alone estimates sales of 2 million pumpkins in 2017 – which is great news for pumpkin farmers across the land.

A good farming summer that has included warm weather as well as lots of rain has helped to produce a big harvest this year, which means there will be plenty of these vegetables to decorate with and keep the party pumpkin!

The origin of the Jack-o-lantern 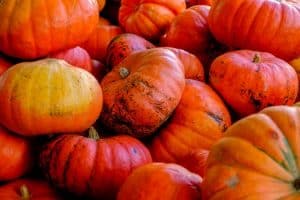 The tradition of carving pumpkins for Halloween, originated from the Irish Legend of “Stingy Jack”. The story goes that Stingy Jack invited the Devil to drink with him. Not wanting to have to pay for his drink, Stingy Jack convinced the Devil to transform into a coin so he could settle the bill.

Once the Devil had done this, Jack turned on his word and kept the coin in his pocket next to a cross – This prevented the Devil from returning to his original state. Jack eventually freed the Devil so long as he promised to leave him alone for a year and, should he die, he would not claim his soul for Hell.

The following year, after the agreement had ceased, the Devil returned to Jack and was tricked into captivity yet again. This time Jack had convinced the Devil to climb a tree to get some fruit, then trapped him up the tree by marking a cross on the bark. In exchange for Jack allowing the Devil to go free, he bargained that he would be left alone for a further 10 years.

Jack died shortly after and, true to his word, the Devil did not claim his soul. However, Stingy Jacks trickery and deceit meant that God would not allow him passage to Heaven either. Therefore, the Devil sent him into the darkness with only a burning coal to light the way.

Although the tradition of making Halloween Pumpkins has evolved over the years to be no more than a decoration, it doesn’t make it any less fun to get involved with.

So, we’ve researched some cool ideas for alternative ways that you can make some awesome Jack-O-Lanterns. Read and enjoy:

A green flame pumpkin would look fantastic and provide a spooky ambiance for your Halloween party.

Make sure you take all of the relevant safety precautions for this one – Dry ice can be dangerous!

If you’re looking for something with a bit more of a gross effect, try this Oozing pumpkin recipe.

Have a great Halloween from Cooke Fuels!

There you have it! Some fantastic ideas for making some extra special pumpkins for your Halloween party this year!

Cooke Fuels will be open as usual over Halloween, so if you need some fuel, oil or lubricants for your Halloween celebrations or otherwise, contact us and we’ll be happy to help.

Sometimes we get so wrapped up in the fact that pumpkins make brilliant Halloween decorations that we forget they’re eatable!

A lot of us waste the pulp from our pumpkins, when we could be using it to make some delicious treats!

That’s why, we’ll be sharing some pumpkin party recipes on our Facebook, Twitter and LinkedIn. Get involved by tagging us and sharing your favourite pumpkin recipes with hashtag #HalloweenBaking to help others prevent waste!